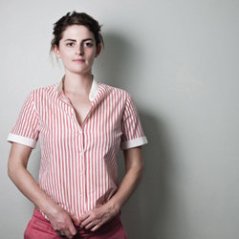 Ever had a foil cloak wrapped round you and Nutella smeared on your arm? Ever been handed a box of soothing tea because you look ‘fragile’? Ever had balloons thrown in your face and your laptop chucked in a binliner? I’ve had all these things (and more) done to me at the Fringe and we’re not even halfway through. I feel thoroughly abused.

These sort of experiences take me outside the performance. They don’t make me feel part of it, which is what I think they usually intend to do. I feel conspicuous, sometimes downright embarrassed, and spend the rest of the show worrying what might happen next. Because of this, I feel unable to give my full attention to the actual content, as much as I wish to, and as a reviewer this isn’t helpful.

If you’d told me these things would happen to me here I might never have applied to be a Biscuiteer. And yet… I’ve actually started to enjoy the abuse. Is that weird? I’ve developed a sort of Fringe Stockholm Syndrome; I begin to love the performers who rough me up the most.

One tip I’ve learned for avoiding being singled out is to never let a performer know you’re from the press. I stupidly asked comedian Martin Mor for directions to the press office. It wasn’t my fault. I knocked on a door which said ‘staff only’ on it and it was just him inside. I couldn’t think of an excuse on the spot so spent the next hour squirming in my seat. He was mercifully kind to me, although he did make fun of the name Fringebiscuit (bloody cheek).

I was beside myself with glee when Tim Key asked me to test his bathwater during Masterslut, which featured an on-stage bubble-bath with a bottle of Radox perched on its edge. I rose from my seat, approached the bath, and stooped slightly to dip my hand in the water. ‘It’s perfect’, I said. Key smiled. He asked me how I ‘take’ my bath, with both water and Radox? I answered yes and he agreed that ‘neat’ Radox would be a bit much. He asked me what I do in the bath. I told him I listened to Radio 4 (Key is a regular on Radio 4. He knew it. I knew it. An unspoken understanding formed between us). He said something about cricket and lost me a little, if truth be told. Then he asked me what I read and I told him my Kindle (which in retrospect was a bit vague, should’ve said Kurt Vonnegut or something) and he told me he listened to Russian ballads and I told him I’d never heard any of those and he told me to sit back in my seat.

Later, as the show ended, I got (what I like to think was) an extra-special hug from him (wet, bear-like), and he popped a sugar cube into my mouth. I actually tasted his fingers. They tasted of Radox.

So I’m embracing this whole audience interaction thing now. It can be exciting, it can heighten experiences and, if nothing else, will leave you with lasting (albeit potentially awkward) memories of the Fringe.

But oh sweet lord: no more Nutella please. And hands off my gadgetry.

2 thoughts on “Audience Interaction: The Agony and the Ecstasy”