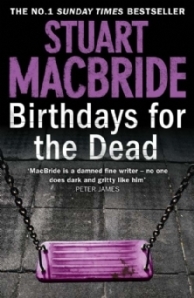 Book Review: Birthdays for the Dead by Stuart MacBride

CRIME fiction can be formulaic. But what if your policeman protagonist, normally the story’s moral backbone, is capable of just about anything?

What if you’re in the hands of an author who doesn’t flinch from even the grimmest scenario? And what if, amidst all this darkness and grot, the book manages to be funny?

The serial killer in Birthdays for the Dead, the new book from Stuart MacBride has been dubbed “The Birthday Boy” by the tabloids. He’s been abducting little girls for 12 years, always in the run-up to their 13th birthday, sending their parents homemade cards each year showing their daughters being slowly and horrifically tortured.

In this stand-alone departure from MacBride’s popular Logan McRae series, Detective Constable Ash Henderson has a seriously faulty moral compass. He’s lost everything good in his life; his daughter Rebecca’s been missing for five years, his marriage has collapsed, he’s been forced to live in a nasty council flat and he’s been demoted. Ash has little left to lose.

What’s more, he has a terrible secret. Each year he is sent a card from “The Birthday Boy” showing Rebecca being brutally tortured. He cannot tell his colleagues because if he did he’d be taken off the case, and he is determined to catch the killer. He cannot even tell his ex-wife, a heavy and lonely burden for any man to carry.

Ash is capable of extreme violence, even torture, and is a seriously corrupt cop, guilty of blackmail, cover-ups and extortion. Through this deeply flawed and troubled character, MacBride liberates the plot by showing us that when we are with Ash, anything can happen.

MacBride sets the story mainly in a fictional Scottish city, fearing he’d be sued by (or at least seriously offend) the police of any real-life locality. This gives an indication of how deep the police corruption featured goes and just how liberated the plot gets. With his rich descriptions of child abuse, torture, suicide, gruesome bodily functions, terrible smells and festering wounds, MacBride requires his readers to have seriously strong stomachs.

Yet, despite all the filth and corruption, the book has a lighter side. Ash has a sense of humour as dry as his name and cuts through pretensions and affectations with his satisfyingly direct manner. When a swaggering local radio personality, the self-proclaimed “Sensational Steve”, invites Ash into his conservatory, Ash reflects: “The conservatory … was big enough for a baby grand piano, a leather sofa with matching armchairs, coffee table, a couple of large pot plants, and Sensational Steve’s ego.”

Though Ash is violent and sarcastic, there is a sliver of nobility at his core, and some of his most vicious moments are shot through with humour. This lack of black-or-white/good-or-evil/funny-or-bleak divisions is another reason MacBride’s work does not fit comfortably into a set formula.

MacBride’s characters are full of convincing idiosyncrasies. One such character is Dr Alice McDonald, a forensic psychologist who aids Ash in his search for the killer. The nervy rapidity of her speech, hair-twiddling and the way she wraps her arm around her body in a self-protective gesture lead Ash to store her number in his phone under the name “Dr McFruitloop”.

But Alice also gets out-of-her-head drunk in order to lower her inhibitions and enter into the mind of the killer. She eats like a horse, dresses like a teenager and proves to be intuitive, loyal and brave. She has a past and troubles of her own. This sort of well-rounded, three-dimensional characterisation lifts the story above formulaic crime fiction, and the relationship between Ash and Alice is one of the most engaging aspects of the book.

It is clear that MacBride thoroughly researched the book (just look at the list of soil scientists, pathologists and the like he thanks at the beginning), which ensures the plot is watertight and authentic despite its fictional setting. MacBride also has a keen ear for dialogue, whether it’s a Scouse, Shetland or Edinburgh accent he’s writing. There are some lovely, acutely observed moments, such as when a mother hides a packet of Jaffa Cakes in the one place her daughter will never look: the tea-towel drawer. These real-life minutiae give the book a human and relatable feel.

The ending isn’t happy, tidy or fair – that’s life, after all – but it is surprising. MacBride’s unflinching exploration of disturbing and senseless crimes, his dark humour and the skilful way in which he gathers several inventive plot threads together at the novel’s end combine to make Birthdays for the Dead anything but predictable.