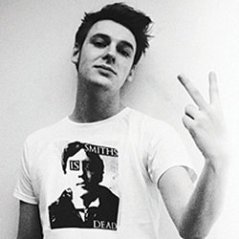 Half a Person: My Life As Told By The Smiths tells the story of William, a young man obsessed by The Smiths (and himself), who is torn between two people: the red-lipped, black-haired, dour Salomé and his best friend, gentle playwright Rick. Lolling on couches, slugging red wine and generally feeling sorry for himself whilst listening to Smiths LPs, William (played by twenty-three year old Joe Murray from Cross Cut Theatre Company) faces infatuation, heartache and a final terrible loss. I met up with Joe in a rather chaotic Black Medicine on Nicholson Street to talk Mozzer, Britishness and bloody critics (!).

I was curious to discover whether Joe had been a fan of the Smiths before he became part of the show – as a diehard Smiths fan myself it seemed the natural place to start. ‘I’ve been a Smiths fan since I was about 17 when I read the NME’s Queen is Dead anniversary edition. Never quite to William’s level, but I certainly got even more into them from doing the show. I’ve become a fairly massive geek on the subject.’

Joe’s vocals and movements when performing the Smiths songs sprinkled throughout the show are testament to this geekiness. Learning the singer’s mannerisms must have been a challenging task; how does one performer mimic another without slipping into karaoke or caricature? ‘I watched a LOT of Morrissey performances and interviews on YouTube and I listened to The Smiths pretty much non-stop. We really wanted it to be William singing the songs, not a sort of bad Smiths cover band. I think the way Morrissey sings is very hard to replicate anyway. Movement-wise, I just had to really commit to it. If you go about it feeling worried about looking awkward, that’s when it looks naff.’

Half a Person is written by Australian playwright Alex Broun, and the original play was set in Melbourne. In this version the story has been relocated to London/Manchester. ‘I think the show has really benefited from being anglicised. The Smiths are so iconic and so synonymous with a sort of “Britishness” that it was a fairly easy job. I think that’s part of the show’s charm now, so if we were to take it overseas I think that would be a major selling point. I think it adds authenticity.’

The show has received a wide range of responses. Fringebiscuit gave the show four stars, the Quotidian Times five stars, The Stage was full of praise for Joe’s performance but not the play itself, and Broadway Baby went for 1 star. I think this disparity may have something to do with the fact that if you hate The Smiths/Morrissey you may automatically hate this play and, on the flip side, if you’re a massive Smiths/Morrissey fan you’ll probably love it. (This question of ready-made fans/detractors is the subject for another blog. Stay tuned).

Half a Person is a wonderful, touching and funny show, and the songs are beautifully and lovingly performed. Go see it, swig some red wine, loll in your seat, and revel in the talent of The Smiths. And as for Joe – he’s a charming man (sorry, couldn’t resist).